A Variation on Conversion from Base 10 to other Bases

So I started with fifty-four divided by four.

[Count out 54 unit beads.  Exchange a four bar for each four unit beads, putting the four bars in the Bars column.  Put the two unit beads left over in the Units column] 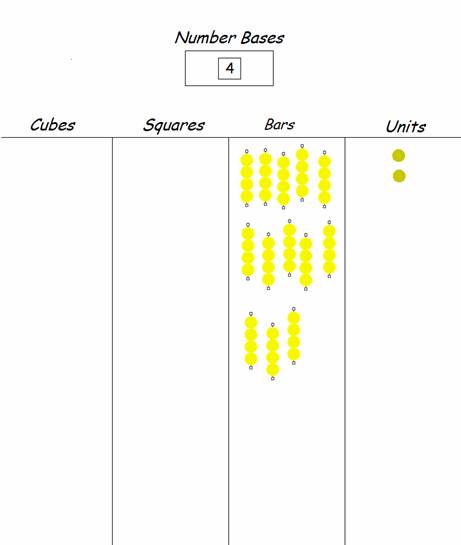 We can see on our board that we have thirteen bars of four with two left over, for a total of 54.  Fifty-four divided by four is thirteen with a remainder of two.

But we can make squares out of some of these bars, can’t we?  How do we find out how many squares we can make?  A square is four bars, so we need to see how many groups of four we have in our thirteen bars.

[Exchange a square for every four bars in the Bars column.] 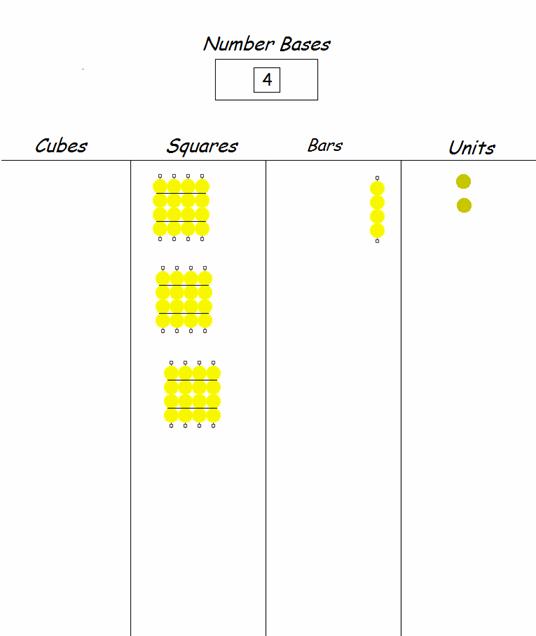 It takes 4 squares to make a cube.  How many groups of four do we have in our squares?  None..

Now let’s look again at the divisions we did:

We started with 54 in base ten.  We found that we had thirteen groups of four with two left over, and that two is here in our units column.

[Point to the two units in the Units column]

Then we took the thirteen bars of four and divided by four again.  We found that we had three groups of four squares and one square bar left over.  And here is the square bar that was left over.

[Point to the four bar in the Bars column]

Then we checked to see how many groups of four we could make with the squares of four.  Four squares make a cube.  But three divided by four is zero, so we couldn’t make any cubes.  When we divide three by four, our remainder is three, and here’s our three right here in the Squares column.

[Point to the three squares]

Since we can’t make cubes, we can’t go any farther.  Our answer is

But look.  We can see the same thing in the remainders—3, 1, 2.  So we can covert from base 10 to base 4 by dividing by 4 over and over.  How do we know when we’re done?  Yes, we’re done when our division gives us zero with some remainder.

Do you think this will work with other bases besides 4?  Why don’t you try it and see.